The Routledge Handbook of Euroscepticism 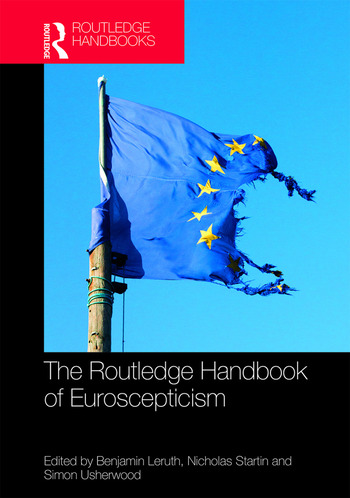 Since the advent of the Maastricht Treaty, a key turning point in terms of the crystallisation of opposition towards the European Union (EU), Euroscepticism has become a transnational phenomenon. The term ‘Euroscepticism’ has become common political language in all EU member states and, with the advent of the Eurozone, refugee and security crises have become increasingly ‘embedded’ within European nation states.

Bringing together a collection of essays by established and up-and-coming authors in the field, this handbook paints a fuller, more holistic picture of the extent to which the Eurosceptic debate has influenced the EU and its member states. Crucially, it also focuses on what the consequences of this development are likely to be for the future direction of the European project. By adopting a broad-based, thematic approach, the volume centres on theory and conceptualisation, political parties, public opinion, non-party groups, the role of referendums – and the media – and of scepticism within the EU institutions. It also reflects on the future of Euroscepticism studies following the United Kingdom’s vote to leave the EU.

Containing a full range of thematic contributions from eminent scholars in the field, The Routledge Handbook of Euroscepticism is a definitive frame of reference for academics, practitioners and those with an interest in the debate about the EU, and more broadly for students of European Studies, EU and European Politics.